You’ve seen him lead the parade, dance on the field, appear at the Christmas lights and, if you were particularly unlucky, you’ve seen his shorts fall down at the 2013 Mascot Race…but just who is that cool croc and why is he hanging around with the Carnival? 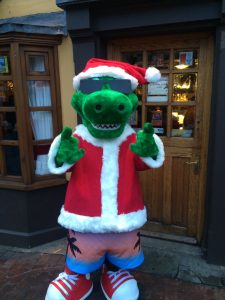 Carni Croc joined the Carnival Committee in 2013, hoping to bring with his some street cred, followers and hot sunny weather (yeah, we told him the hat and shorts were very, very optimistic!)

He braves the elements (sun, wind, rain and snow!) to promote the Carnival and to meet, greet and joke around with all of the Carnival followers.

His claim to fame was bringing home the ‘Best Local Mascot’ award at the 2014 Mascot Olympics and he has continued to work hard in putting Newport Pagnell on the map.

So, keep your eye on this page for details of where Carni Croc will be popping (or croc-ing) up next!