It’s nearly that time of year again: A coven of residents rise from their (very brief) slumber and, under the cover of darkness, gather in the deepest depths of Newport Pagnell to resurrect the carnival spirit … no you cheeky lot, it’s not Halloween; It’s the Carnival AGM! 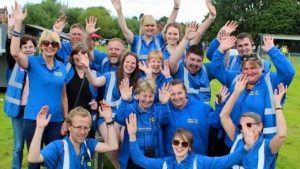 But just what exactly is an AGM, who goes and why should we be excited?

1. A-G-M:
Annual: Our AGM is held every year in October. Why? Because the constitution says so (see numero three).

General: It involved the general members of the Carnival, which includes the current year’s committee, crazy people who want to join the committee and anyone with a share or interest in the carnival (i.e., you! The public are invited and welcome to attend).

Meeting: It takes place face-to-face, in a Newport Pagnell location and must have a quorum of five.

2. We use fancy words, such as ‘quorum’…
Quorum means that you’re never drinking alone. It also means that the Carnival is protected against unrepresented action in its name. We must have at least five people present at any Carnival meeting, in order for it to be valid and for matters to be voted on.

4. Here ye, here ye
Notice of the AGM must be advertised publicly 21 days beforehand. You’ll see this here, on social media and in the Town Hall. We’re not bragging, it’s just Carnival law (see three above).

6. The committee step down and disband. There is no carnival committee. I repeat. THERE IS NO CARNIVAL COMMITTEE. Panic.
At the AGM the current committee resign from their roles and the committee is disbanded. But panic not…

7. The new committee are voted into their roles.
The positions ‘up for grabs’ are detailed (along with their responsibilities) in the constitution and are advertised beforehand. These include the chair, vice-chair, secretary and treasurer. Other roles include parade coordinator, field coordinator, stall coordinator, food and beverage coordinator, ‘the necessities’, main arena entertainment, classic and vintage cars, duck host, road closures and last, but not least, press and public relations.

Everyone at the AGM gets to vote someone into each position. Some positions require a certain level of experience, e.g. the chair, VC, secretary and treasurer must have been on the committee for one full year beforehand. The committee will sometimes appoint apprentices, for succession planning. For example, this year we have two field coordinator apprentices, learning the ropes from the head field coordinator (Dave). Anyone wishing to resign from their specific role will often carry out a hand-over year and anyone new joining the committee, who isn’t after a specific role, can take the general position of ‘committee member’ and help out everyone!

8. There is more than one committee.
We’re not a one committee kind of gig! The Carnival is made up of the main committee but also a number of sub-committees. For example, the fundraising sub-committee and the music sub-committee. It makes life a lot easier because the full committee do not have to be concerned about matters completely out of their remit and it means that decisions, such as exactly which Lady Gaga tribute act we are going to hire, can be voted on by the sub-committee, rather than by a full committee vote.

9. Sorry folks, this is a private gig – members only
Once the committee and sub-committee are voted in, the AGM turns into the first Carnival committee meeting….which is private. So anyone attending the AGM as an interested party but not volunteering to join the committee will be kindly asked to leave.

So that is the Carnival AGM is a 10-fact nutshell. This year our AGM takes place at Newport Pagnell Working Men’s Club, Silver Street on Monday the 3rd October at 7.15pm.