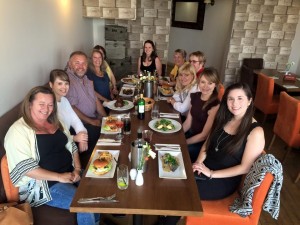 It’s getting cold, the nights are dark, the rain is here, the frost is around the corner…it’s a good job we have some exciting news for you.

Tuesday 27 October was National American Beer day AND the Carnival AGM…I don’t know what we were more excited about.

Goodbyes – Sadly we said goodbye to two
hardworking volunteers: Hazel West and Laura Cooper. Both have been an invaluable part of the committee over the last few years and they will be very much missed – but both have promised to help out where they can (and we’ll hold them to it!). So thank you girls – a lot.

Hellos – Excitingly we said hello to nine new volunteers. Yes, nine! We rely heavily on volunteers and so was very happy to see brand-new faces at the AGM in October. After the initial lack-of-chair panic, the new members were quickly welcomed, appointed roles and given tasks….you’re gonna love it.

Down-to-Business – So now, we can officially announce the 2016 appointed Carnival Committee members and roles:

Phew – that was a lot to announce. So, all-in-all I think the AGM won; but national beer day was appreciated too…

The 2016 committee will be at the Newport Pagnell Christmas Lights switch-on, fundraising at the Carnival stall – so make sure you come along and say hello – Saturday 28 November.