Wow – what a brilliant weekend! Thank you to everyone who came along to support, join in and contribute. Here’s a quick recap and rundown of the weekend:

The 2015 Carnival opened with 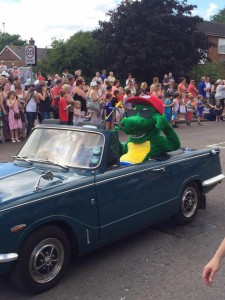 the ’50 Bedtime Stories’ themed parade. Thirty-four entrants walked, cycled, drove and Zumba-ed from Blakelands, through the High Street and onto Riverside Meadow. This year we also had three special celebrities take part in the parade – Clem Curtis, Vicky Ogden and Sam Attwater. The winning parade entrants can all be found here.

The music stage then opened with a set from Plucky Haggis and continued throughout the day with music from Legion, Lizzie Lister, Dan Walder and Indifference. There was even a surprise contribution from Foundations singer Clem Curtis.

Strongman John Evans wowed the crowds by breaking not one but 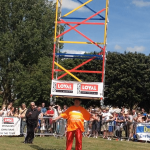 two world records! John successfully managed to balance 12 tyres on his head for over 10 seconds and then went on to balance a four-metre high tower scaffolding on his head for 15 seconds. We also had an unexpected world record  broken by Peter Dowdeswell, who ate 10 eight-inches long, one-inch thick sausages in 16.5 seconds! Wowzers!

The fun, and sun, continued on Sunday where we had 63 vintage cars in the classic car parade and 86 on the field afterwards! The winners can be found here. Well done chaps!

Sunday also had the

car boot sale, Hula Animal Rescue dog show and the duck race. Details of the fastest and prettiest ducks are all here.

All winners have been contacted. Congratulations!

And finally, the winner of the 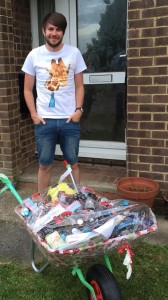 So a huge thank you to you all, for joining in at the weekend. Plus a special extra big thank you to all of our fantastic volunteers – we quite simply could not have done it without you.

If you have any photos of the day, please do tag us in them on facebook, or send them to npcarnivalpr@gmail.com.