Newport Pagnell Carnival Committee are very excited to announce their first 2015 field entertainment act and let’s just say he’s got a lot hanging over his head!

You said you wanted bigger, you said you wanted better…and boy have we delivered. This year we are delighted to announce that the man, the myth, the legend…head-balancing strongman John Evans will be taking centre stage! Yes you heard right – 2015 will see the 33 times Guinness World Record breaker and 47 times Record Holders Republic holder take centre stage at Newport Pagnell Carnival on Saturday 04 July.

John has over two decades’ worth of 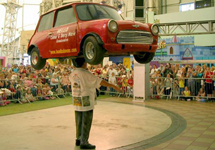 international head-balancing experience and at 68 years old that is no mean feat! With 27 gorilla tubs, 12 tyres, a 20 foot pole and a Mini Cooper all featuring as part of his act this is something that you do not want to miss.

John said “I am delighted to be performing at Newport Pagnell on 04 July – making history and putting on a performance that people will never forget”.

And if that wasn’t enough, up and coming strongman Simon Plant will also be attending and attempting to break the Record Holders Republic record of pulling a 15 tonne lorry 20 feet…with just one arm!

Don’t say we never spoil you –  there’s even more entertainment to be announced next week!